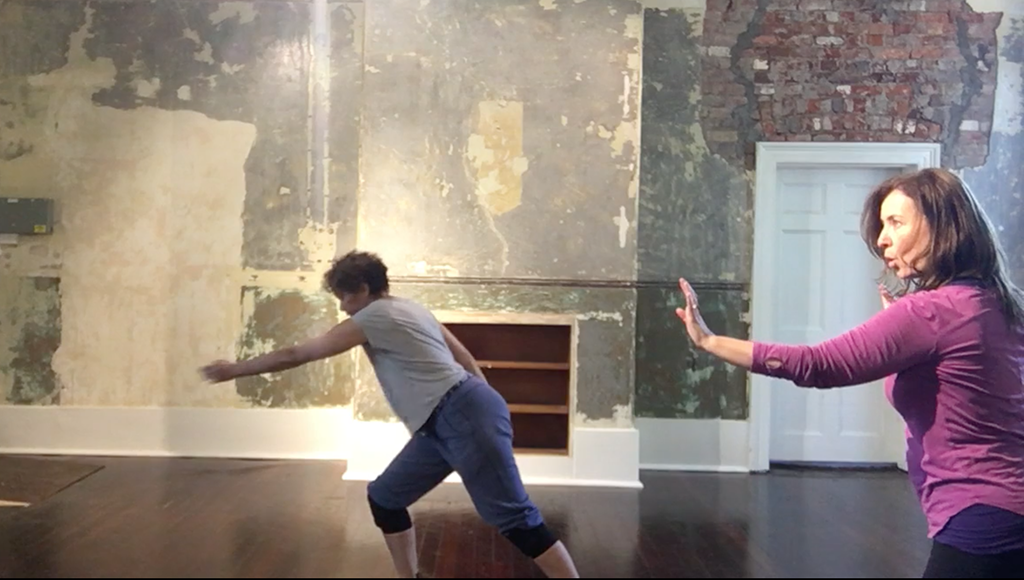 In December 2015/January 2016, I invited Vicky Kapo, an experienced choreographer and theatre maker, to participate in three discovery workshops. In these workshops, we practised closely attuning-to one another so that we might feel and sense our immersive conditions. The aim was to be open to the visceral phenomena that arose in, through and between our bodies and within the environment. Our task was to wait, listen, notice, respond, and allow the immersive and generative forces within and between us to mobilise. At the time, I had no words for what we were doing but through processes of reflection and action, I recognised that we were attempting to attune-to what I now call wild life. In these workshops, we attempted to enact Merleau-Ponty’s idea that “to be a consciousness, or rather to be an experience, is to have an inner communication with the world, the body, and others, to be with them rather than beside them” (1945/2012, p. 99). Closely attuning-to visceral phenomena, as well as attuning-to the thickness of the perceived and the perceiving, awakened a body-world connection that supported and sustained this artistic practice.

In the following footage (Moving Image 11), taken during the first workshop, Vicky and I moved and sounded in relationship with one another and the environment. There is evidence of us attuning-to one another as the sounds and movements we utilised referenced one another. Vicky began the improvisation in the centre of the space, her feet firmly planted on the ground in a lunge position. She created loose circular movements with her arms. I entered the space on the periphery and circled Vicky. We occasionally glanced at one another. Our connection was evident when, for example, I eventually began to make sound. At that moment Vicky paused her movements. As the improvisation progressed, short, rhythmic patterns and pitched soundings were exchanged and picked up from one another. There were also small hand gestures that were mirrored. An audible breath from one of us signalled a shift in mood and although we were not obviously looking at one another, our movements often simultaneously coincided.

There was a significant shift in mood when I was sitting on the ground and moving in a circular motion. A vocal keening emerged along with the circular movements. Once again Vicky paused as something new entered our shared environment. She moved in support of this vocal keening, this time providing physical support with her back against mine and then with her hands on my back. The keening eventually softened until something softer and less intense emerged, triggered by tiny finger movements. We simultaneously found an end to the improvisation.

In this improvisation there is a palpable but invisible bond between us that, for me, was experienced as an intertwined dynamic. At times, the piece appears choreographed or planned but I know that when I was in it I was not thinking about the effect of gesture and sound in a linear or choreographed way. I was being attentive to visceral phenomena in a heightened way. Decisions were being made about what I might take up, but this decision-making process was different to ordinary decision-making. I was conscious of attuning-to experience differently because a corporeal intelligence was at play that felt different to ordinary intelligence. In this improvisation I consciously activated my peripheral vision by taking attention to the eyes and eye sockets, to become aware of what I could perceive at the edges of vision. This created an openness that allowed for greater capacity for attuning-to the bodily sensations and perceptions that emerged. It also fostered an awareness of what was occurring in the environment more broadly.

In the discussion that followed, we agreed that we had both moved through at least three different states. Each state had a particular mood that was signified by a gesture and/or sound. For example, the circular movements at the beginning seemed to both define and open the performance space, preparing it for something to enter. Our sounds were similar and purposeful. This moved to a more conversational exchange where my sounds were high pitched and Vicky’s sounds were low pitched. This exchange in vocal sounds imperceptibly shifted until eventually, my sounds were low pitched and Vicky’s sounds were high pitched.

The vocal keening occupied the middle section of the improvisation. We both felt that we had prepared the space for this keening to enter. We discussed afterwards that the keening felt bigger than us. We noticed at first, a mood emerged that was based on the personal experience of grief, but that soon shifted and felt like a deeper and more universal grief. Something about the unspoken experience of sorrow is awakened through the keening sounds and the circular movements of our bodies. These whole-bodied circular movements occurred in the centre of the space referencing Vicky’s earlier circular arm movements. This time we were on the ground and the experience was emotionally charged and affecting. Although it was not a conscious decision to reference Vicky’s opening movements, I felt viscerally drawn to that central space and remained open to the movements/sounds that emerged as I entered and the spiralling motion suggested itself to me. This is perhaps an example of where, as Grosz says, “the personal gives way to the impersonal and the living connects with and is driven by events beyond it” (2011, p. 38). For Grosz this is “when a consciousness follows and joins matter, when matter and life align to form art” (p. 38).

From a performance perspective, the intensity of this keening was more fully realised because of the support I received from Vicky through her back and her hands. The spiralling motion also gave this keening dynamic a way to enter and exit. We discussed afterwards that this pattern of keening spiralled through us and then left the shared environment. The tiny finger movements at the end signified, for us, that something was dissipating. The intensity was gone and there were just traces left behind until we both came to a place of stillness.

The performative experience I had with Vicky in this discovery workshop helped me to understand what Grosz means when she says, “life brushes up against matter as its inner core” (2011, p. 52). I came to know how the lived experience of artistic creativity is capable of “housing the aspirations that life imposes on it” (p. 52). In this discovery workshop, I learnt how to actively sense into changing moods, states, and dynamic intensities by attuning to the multi-sensory corporeal indications that emerged during our improvisation. I learnt also to attune to the dynamic and generative forces if life that are affecting, ever changing, unpredictable and open ended. This was made possible by applying a performance ontology of becoming that consciously acts and lives with an awareness of immersive conditions.  This particular experience was the catalyst for a piece that eventually made its way into my performance event in April 2016.

I took the keening idea to Myfanwy Hunter, the musician who was working with me on my performance. In the first session, we entered into a wild and energetically charged improvisation. I was sounding and moving while she played the viola. The improvisation was playful and excessive at first but it soon became darker and more charged with the sorrow-filled intensity of my early improvisation with Vicky. At the time, I had no clear direction or through-line for this performance piece. Myfanwy and I did translate this work into the April 2016 performance, but the idea never really fully resolved for this event. The vignette was performed differently each night, and both Myfanwy and I never fully captured our ideas for this piece. It remained unresolved for the duration of the performance.

I now have a clearer idea about how I would perform this piece and have an image of this piece as a future work. I realise that during the performance season it operated as a loose thread that was pointing toward future developments. Upon reflection, I can accept that it was perhaps important to have an unfinished work included as part of the performance event, even though this sat slightly uncomfortably with me. It reflects an important constitutive aspect of the creative process and so deserved a place in the piece as a whole.

In my experience, ideas do not come fully formed, but turning attention toward bodily indications of an idea gives the artist something to focus on – something to do. Tharp (2003) says that she realised she would “never get to the essential core of movement and dance through a cerebral process”, and that artists “can only generate ideas when [they} … actually do something physical” (p.99). As Bergson claims, “invention gives being to what did not exist; it might never have happened” (1946/1992, pp. 58 – 59). This conditional element of invention creates endless possibilities and/or multiple beginnings. It was therefore appropriate to include an unfinished work in a performance about human artistic creativity. This is how creative practice is sustained over time. There are always threads that can be picked up and augmented from within the practice itself. Ideas are everywhere and for me ideas reside within and emerge from visceral phenomena. In the next section, I describe another vignette I developed for performance that actively explored the process of how ideas actually manifest through visceral phenomena.