This performance ontology of becoming is enacted, as discussed in Chapter Two, through processes of live knowing. In my experience, live knowing moves us toward the ever-pregnant latency and potential performativity of what Deleuze and Guattari (1987, p. 4) call “intensities” that continually assemble and disassemble. Live knowing is an encounter that places practitioners between the edges of things and thus, through live performing bodies, creates ambiguous, disruptive, playful and creative states that are open ended and generative. 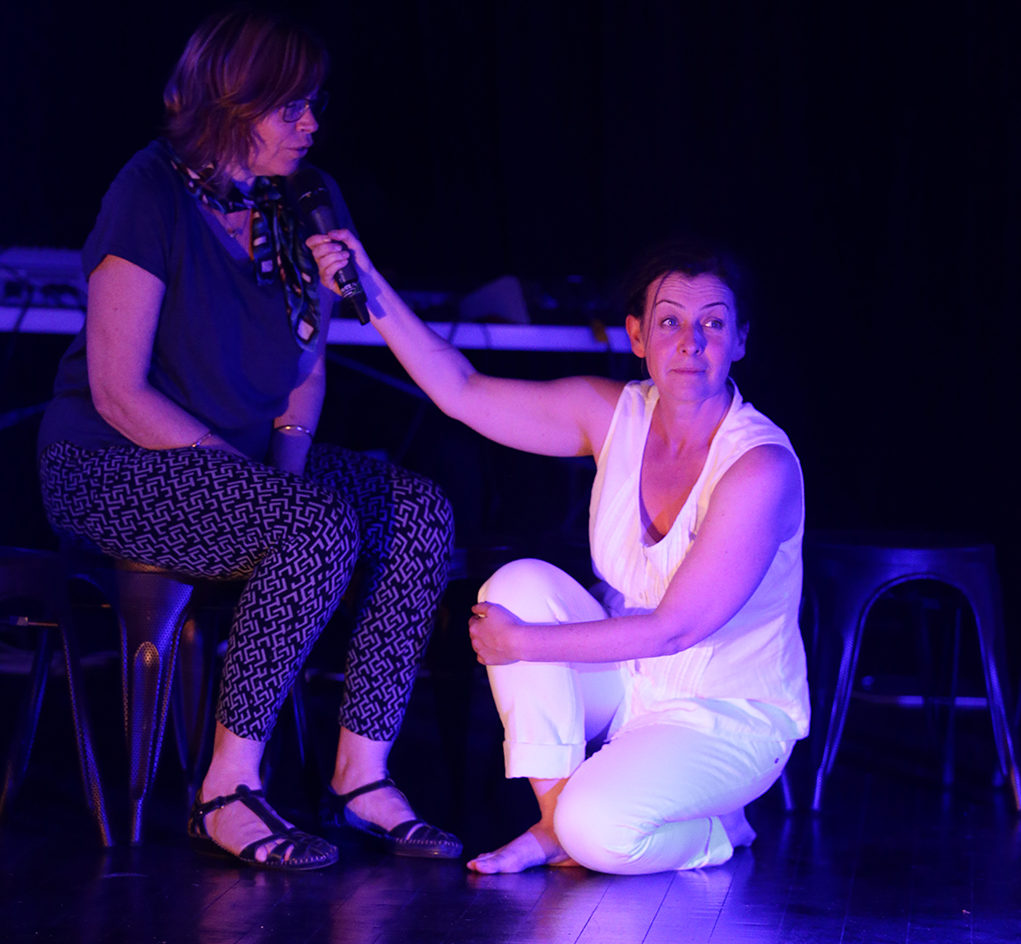 For Deleuze and Guattari, the encounter is that which “forces us to think” because our typical systems of knowledge are disrupted (1994, p. 139). Following Deleuze, O’Sullivan (2014) explains that when we have an encounter we are not faced with something we already know, something that assures us of our identity, but rather a genuine encounter ruptures something. O’Sullivan says that an encounter consists of two kinds of moments. One is a moment of dissent or turning away or refusal, the other is a moment of affirmation, of creativity, or a turning toward something else. I find this explanation of an encounter very useful for my performance practice because it is about constructing a performative encounter that might provoke a shift in experience and understanding.

Machon suggests the (syn)aesthetic performance style has potential to provoke a shift by enhancing the capacity to “perceive the details corporeally” (2009, p.7). In my experience, attuning to visceral phenomena, focusing in-between and imagining immersive conditions allowed for an encounter with wild life that created shifts in lived experience that presented inventive and surprising possibilities for artistic purposes. Some audience reflections also revealed that, in their encounter with my performance, they experienced something of a shift, expansion, disquiet, sense of confusion, or provocation into thinking or behaving differently. Comments included, “I loved the fabulous vocal sounds. I’m going to try them on the way home. I want to stretch my face and show my teeth”, and “I absolutely wanted to join in the voice”, and “when you were rolling around inside and outside the Möbius loop, I actually wanted to join in. You were so unknowing and curious and tumble-full” and “you evoke deep and thoughtful feelings and thoughts” (Audience responses 15 April 2016).

I do not refer to these audience experiences as evidence of knowledge transfer or that my intentions were realised. As Kershaw says, any “knowledge” or “profound dislocation” that an audience member might experience “cannot be confirmed: one can only indicate the conditions that may have made it possible” (2009, p. 11). I simply make the claim that by having an ontological position that guides the creative decisions one makes, it is possible to foster the live conditions that can make transformation possible. The performance practitioner achieves this by attuning-to visceral phenomena, focusing in-between things, and actively imagining immersive conditions. What these audience responses point toward is, as Machon says, “the way in which the (syn)aesthetic style, when manipulated to its full, encourages performance to be an experience in its purest definition; to feel, suffer, undergo” (2009, p. 22).

An example of how I achieved this in my performance was when I invited the audience to physically move from one part of the space to another. I was interested here in making myself and others performative by bringing, as Carlson says, “consciousness” to ourselves and others “in/as performance” (2004, p. 5) I was inspired here by the Marina Abramovic in Residence show that I saw in Sydney in 2015. In this work, Ambramovic engaged in what she calls “live experience performativity” (Gibson 2015). She invited audience members, or exhibition participants as they soon became, to engage in a series of physical attunement exercises led by a video recording of a person doing these exercises. Participants were then, amongst other things, invited to sit and count rice, to sleep in a bed, or to sit opposite a stranger in silence. Abramovic’s work resonated with me because the seemingly everyday activities, framed within an aesthetic context, brought a heightened attentiveness to my experience and a surprisingly moving connection with the strangers I encountered. My experiences I recognised were performative and hence affective. I was keen to create this live experience performativity within my own performance.

The director of my performance, Kirsten von Bibra, and I began to think about how creativity requires one to constantly shift one’s perspective or point of view – like turning a painting upside down. We decided to include a section in the performance where I would attempt to move the audience from one side of the performance space to the other using only gesture. Using her Alexander training, Kate Barnett gave me very specific ways of holding my hands in ways that would invite and make it easy for people to stand up. She showed me how close I needed to be to the other person if I wanted to invite them to stand up with ease and make my intention clear through my body and without any words – I noticed that this meant I needed to be surprisingly close to the other person (Figure 14). 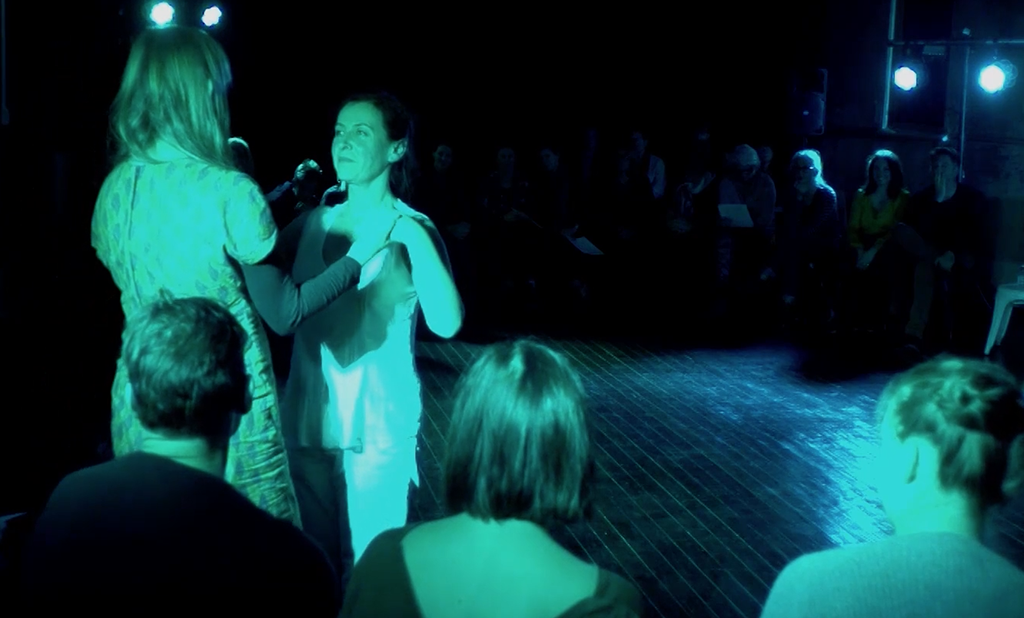 Changing the audience point of view by inviting them to move was my way of creating a moment of live knowing for both performer and audience. This experiential moment in the performance was an attempt to enact, with the audience, the process of shifting one’s perspective to expand perception.

In performance on the second night, there was anticipation in the room. I sensed the audience wondering what was going to happen next as I took my eyes directly to the faces of the audience and gestured to a person to stand and be moved. I used gesture, facial expression, and touch to then communicate my request to the whole group. I noticed that the audience started to become a bit agitated when they all stood up. I made a ‘shhh’ sound to them but was very unsatisfied with the result, partly because not everybody heard my ‘shhh’, and partly because I wanted to achieve my objective without using my voice at all in this section. My frustrations were echoed in this audience response:

The touching of shoulders, one’s touching of the persons in front and the touch of the person behind me in the line re-enforced communality and subject/object relation. When the line moved, the heightened sense of hearing the audience’s sounds of walking was exciting. I found the “Ssssh!” you gave distracting to my engagement at that moment. However, I, and the whole audience, I sensed, took control of that sound and more or less pursued its making and tuned into it in an even more heightened way. This may have been your intention.

When you made the audience move, I liked it very much ‘cause it allowed me to be part of the space actively and see your work from a different perspective.

In performance on the third night (Moving Image 10), I was calmer, more attentive and more able to invite people into a moving process during this sequence. The first person I approached did not want to stand, but I was able to reassure him, and meet his need to stay seated, without being phased. I then placed my hands out, palms facing upward. I assumed my gesture was clear but he drew a question mark on my hand with his finger. This performative act was surprising, creative and communicative. We exchanged a look, I moved closer to invite him to stand but he clearly wanted to stay seated. As a way of settling us both, I placed my hands gently on his shoulders to reassure him that our interaction was over. There was an exchange of mutual vulnerability. I calmly moved to the next person who was happy to take part in what I asked of her with my gestures.

I decided to take the two deep breaths. This served to settle us both. I dilated attention further to include: the space behind me, the bodies of the audience, the spaces between us, and the space behind individual audience members. In this heightened state I noticed, when working with the whole group, the effect my gestures had on them as I could see them moving in the directions I prompted. No words were needed. I felt my research come alive in these moments. There was a palpable complicity between the audience and myself, we understood one another and had an unspoken but clear goal – to move around the space. As the audience began to physically move, with my help, this goal gained momentum and clarity. The attentive silence in the room suggested that we had all dropped-in to a more heightened awareness, or what I call a moment of live knowing.

During this section of my performance my senses were heightened, I communicated through gesture and movement, without spoken language. As Merleau-Ponty points out, “there is a world of silence…where there are non-language significations” (1964/1968, 171). This live experience performativity highlights the ways in which my performance ontology of becoming can be enacted through live performance.

In the following sections, I provide other examples of how I have activated and enacted my performance ontology of becoming in a discovery workshop setting, in a scripted section of the live performance, and in a focusing session. I note that the corporeal practices that I have used are by no means the only ones that might underpin such an ontological framework but they are the ones that emerged most prominently from my particular research project during the time of its enactment.