4.1 wild Being and Artistic Creativity 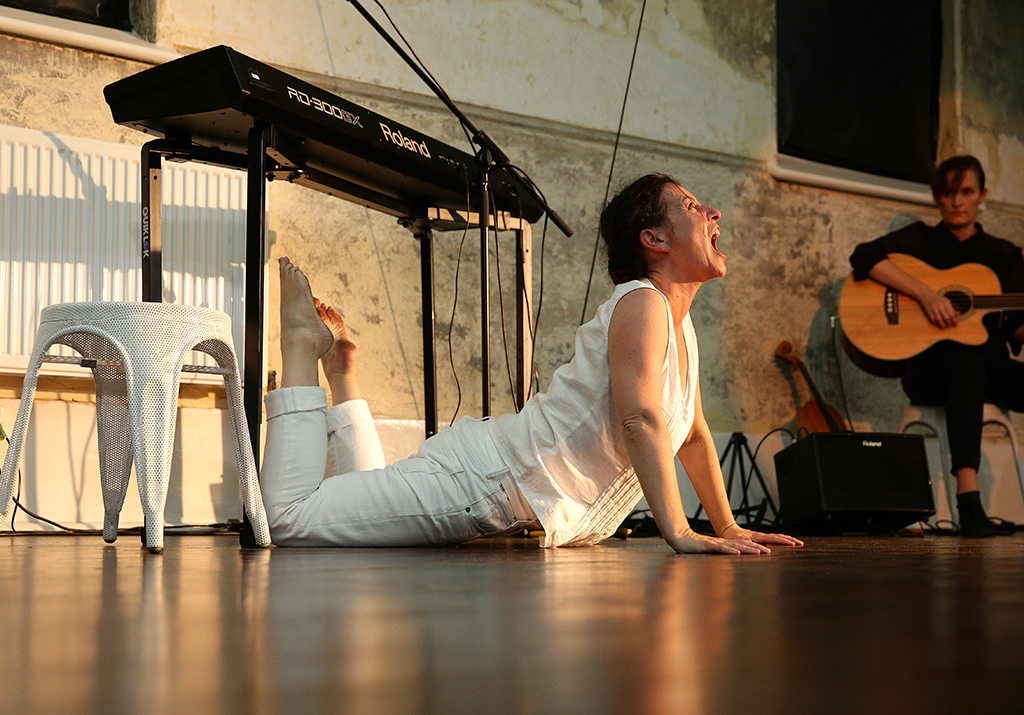 Artist’s descriptions of the creative process resonate with Merleau-Ponty’s description of wild Being. For example, Merleau-Ponty says “being needs creative differentiation for it to experience itself” (1964/1968, p. 197). In my view, artists are more readily able to access this fundamental structure because they access experience differently by actively remaining open to dynamic and omnidirectional sensory inputs that are primal, visceral, and often libidinally affective. This idea is captured in Fiona Apple’s description of her creative process:

When I’m singing and playing, it’s really the only time ever where I’m not thinking about anything. Every little nerve ending and every loose end in my being is somehow sated. Everybody’s trying to be in the moment. That’s when I can do it, and it just happens. I don’t have to worry if I’m playing and we’re in it. You’re not always in it, but when you’re in it, you wake up from this. I’ve had the most wonderful moments of my life, and after a song ends, it’s like you’ve just woken up from the most delicious nap, and everything looks really bright and clear. (2010, p. 18)

Although Fiona Apple describes the experience as waking up from a nap, I contend that she is accessing experience differently to ordinary experience. Her description that “every little nerve ending” is “sated” suggests that she is not napping at all but that the experience is viscerally affective in a way that is not available to her in everyday experience. The fact that she can describe the experience means that there is a level of conscious awareness present, albeit different to ordinary conscious awareness. As Merleau-Ponty says, “it is a question of creating a new type of intelligibility” (1964/1968, p. 268). There is a kind of corporeal intelligence at play in Apple’s experience that resonates with Merleau-Ponty’s description of wild Being.

Grosz explains that through its activities and labours, this wild Being makes itself into consciousness, and is a “dynamic site” of coherence and unpredictability that is inherently oriented toward the future, toward that which “does not yet exist” (2005, p. 121). These are qualities nurtured by artists in the process of creating works. For example, the composer John Cage, amongst others, believed that music could be a reflection of the “processes and algorithms that activate and create the world around us” … and that this is an “emergent process” (Byrne 2012, p. 331). Singer/songwriter Laurie Anderson says that creativity is about “opening my eyes to see what’s there, to be aware” (2010, p. 17).

A number of first-person artist accounts describe the creative process as a sensory experience that opens them as a conduit, receiver, host or channel so that artistic works can move through them. Many artists describe a visceral body-world experience that leads them to feel as though the artist and the art are quite literally one and the same thing. For example, Sachs claims that:

The dance is the mother of the arts. Music and poetry exist in time, painting and architecture in space. But the dance lives at once in time and space. The creator and the thing created, the artist and the work are still one and the same thing. Rhythmical patterns of movement, the plastic sense of space, the vivid representation of a world seen and imagined—these things man creates in his own body in the dance before he uses substance and stone and word to give expression to his inner experiences. (1963, p. 3)

Coleridge muses on this idea by saying, “What is poetry? is so nearly the same question with, what is a poet? That the answer to the one is involved in the solution of the other” (1796 cited in Rothenberg & Hausman 1976, p. 62). Contemporary artists too describe this immersive state. For example, writer Ruth Ozeki believes she is a conduit for her characters to find their way into the world.  She elaborates as follows:

I hear them. I don’t really feel as though I’m writing the character of Nao it’s more like she’s kind of parasitising me and using me as a way of expressing, you know as a kind of vehicle to express herself. It’s an odd feeling but I do sometimes get the sense that there are these kind of characters out there in the ether sort of swimming around in this Pirandellian soup this kind of primordial soup, waiting for the right novelist to show up so that they can jump on board and find their way into the world. (Wheeler Centre, 2013)

In her book The Artist’s Way, Julia Cameron collects the ways in which artists describe this immersive state. For example, she quotes William Blake who says, “I myself do nothing, The Holy Spirit accomplishes all through me” (1995, p. xii); Piet Mondrian who says “the position of the artist is humble, He is essentially a channel” (1995, p. xv); and Aaron Copland who says “inspiration may be a form of superconsciousness, or perhaps of subconsciousness – I wouldn’t know. But I am sure it is the antithesis of self-consciousness (1995, p. 14). Ghiselin’s volume is another collection that includes artist testimonies of this expansive state. He quotes Wordsworth who describes the creative process as “widening the sphere of human sensibility . . . the introduction of a new element into the intellectual universe” (Wordsworth cited in Ghiselin 1952, p. 8).

I suggest that in this creative state, artists might be attuning-to what Merleau-Ponty calls wild Being. I propose that by attuning-to omnidirectional sensation and perception more closely, mind/body binary concepts can be avoided, and immersive, creative states can be attuned-to more readily. I suggest that this is actually a highly conscious process. Many artists from across the arts describe a heightened sense of awareness during creative activity, particularly when engaged in improvisation. For example, Jazz pianist Keith Jarrett uses his voice and body whilst playing piano, seemingly as an integral part of his improvisational process. Moreno (1999) theorises that this is a procedure that reveals in Jarrett “the presence of a conscious thought process”(p.75). Jarrett explains in a video interview “improvisation takes everything to do it, no editing possible, it takes your nervous system on alert for every possible thing in a way that cannot be said for any other kind of music… I am essentially an improvisor, I learned that by playing classical music” (Jarrett, 2014). Jarrett’s description of improvisation signals a highly conscious process where bodily sensations and perceptions are heightened for the purposes of creation and invention. His ideas about improvisation resonate strongly.