6.1 The Real, Difference and Becoming

If, as Grosz suggests, the domain of becoming is constitutionally generative, open-ended and creative, then becoming is an important concept in the context of this project. In fact Grosz already identifies resonances between this philosophical position and art by linking the concept of becoming to creative activity. For example, she suggests the arts can “express more directly than the sciences” the “continuities and connections” between life and matter (2011, p. 42). Following Bergson and Deleuze, Grosz recognises that art can “express the real” (p. 42). The real, in this context, is defined, as the open-ended and ever changing forces of difference that operate in the domain of becoming. 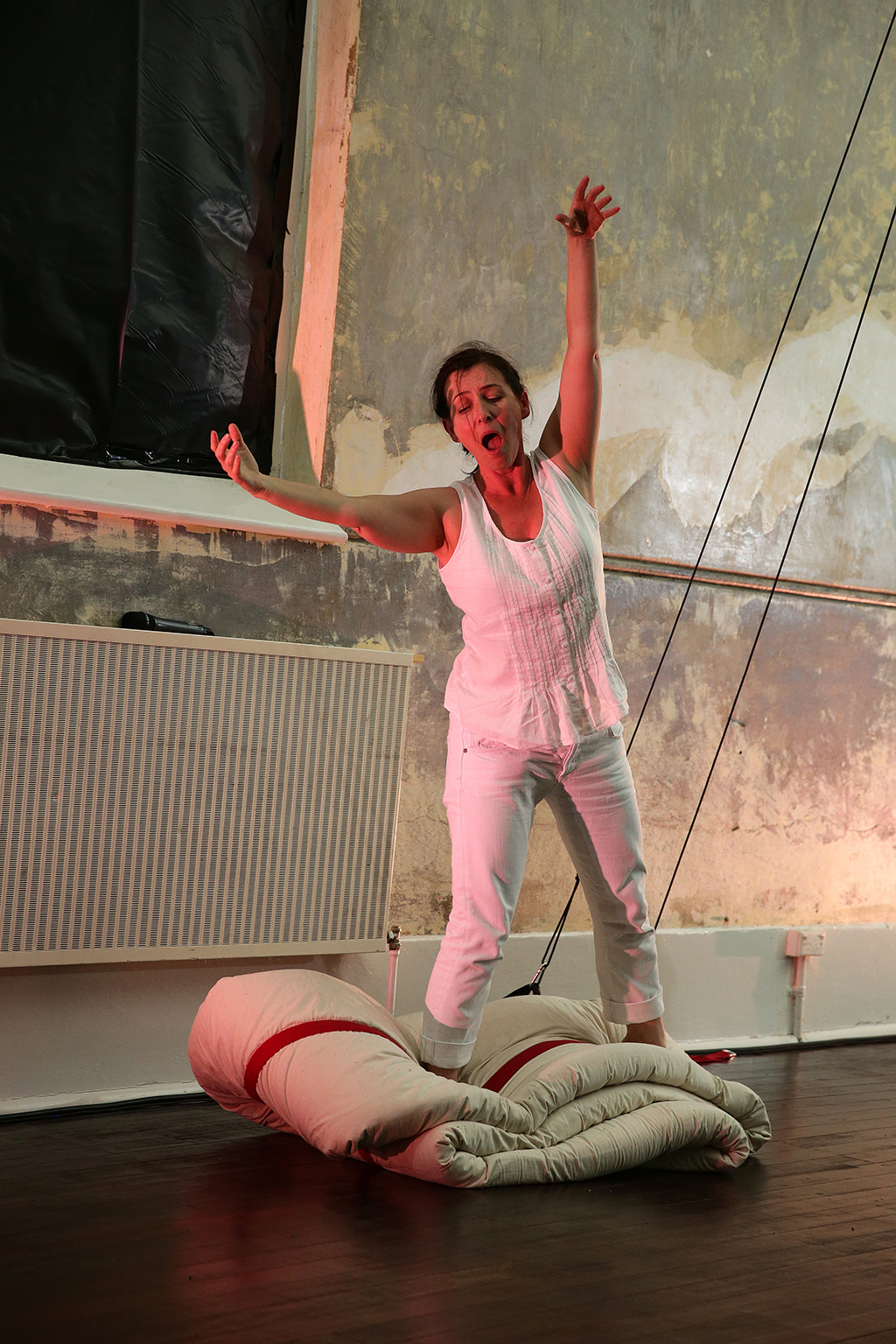 Following Bergson and Deleuze, Grosz gives an account of the real based on two principles: “first, the real is positive, full, has no lack or negation, except through its own positive capacity for self-enfolding; second, the real is dynamic, open-ended, ever-changing, giving the impression of stasis and fixity only through the artificial isolation of systems, entities, or states” (2011, p. 54). My research, therefore, focuses on verifying this position on the real for myself through performative action within a theatre performance context. I suspend mind/body, subject/object binary concepts and attempt to attune-to the immersive constitutional conditions of becoming that manifest through visceral phenomena and observe, where possible, how these open-ended forces operate in service of artistic creativity.

According to Grosz, Deleuze is an ontologist because his philosophy is interested in “redynamizing our conceptions of the real” and “freeing up becoming from any determinate direction” (2011, p. 55). This capacity to free oneself of any determinate direction is an attribute that artists believe is of critical importance to the creative process. For example, in theatre contexts improvisation is used to “set in motion the creativity of the actors” where “chaos is necessary” and because there is no determinate direction “truly creative work makes use of chance” (Callery 2001, p. 164). Deleuze’s philosophy is about mobilising the force of difference, and for Grosz, “it is the becoming-artistic of scientific knowledge and the becoming-scientific of artistic creation” (p. 55).

Grosz uses the work of Darwin, Bergson, and Deleuze to highlight the concept of “difference as a force” (2011, p. 40). The argument is complex and nuanced, and whilst there is not time to fully elaborate here, it is worth citing the following synthesis by Grosz to help frame this philosophical position:

Bergson develops Darwin’s idea that species are separated by degrees of difference; they are forms of variation that contain a common elaborative force but that diverge, fan out, and differ from each other more and more as time passes. Deleuze develops from Bergson the idea that these differences, differences of degree that enable species to differ from each other and differences in kind that create lines of cleavage between the material and the living, are constitutive differences – not differences between already existing entities, but those differential forces that internally differentiate things, including living beings. (2011, p. 40)

Entities, in this world-view, are made up of differential forces that are dynamic and temporally sensitive. According to Grosz, duration is the ‘field’ in which difference lives and plays itself out, the ‘domain’ of becoming; duration is that which undoes as well as makes” (2011, p. 43). To adopt this conceptualisation of life is to imaginatively and quite radically activate a process of consciously attuning-to experience differently. It allows life to then be felt as a dynamic, generative, and open-ended force of difference within a temporal field. In my experience this is far easier to say than it is to enact.

In the moments, fleetingly at first, of consciously accessing experience in this way, I began to notice energetic patterns, swirls, and forces that clearly manifested themselves as body-based visceral phenomena. By accessing experience in this way, I have felt myself as an entity amongst many others that is affected and moved by the generative and open-ended forces of difference within the durational context of becoming. The time-based nature of live performance, therefore, makes it an ideal medium for the embodiment of these particular ontological ideas. Live performance draws on the inevitable force of differentiation and elaboration within systems that emerge or actualise “only in duration” (Grosz 2011, p. 43). In the heightened or compressed context of theatre performance, and thus also in the everyday or the expanded context of life, artistic creativity is inextricably entwined with the constitutional forces of life as a continuous field.

This concept of the continuous field of experience in the domain of becoming can also be seen in Merleau-Ponty’s later work. He says “there is for example no positive flux of singular…; there are fields and fields of fields, with a style and typicality…which are also a relation between the agent (I can) and the sensorial or ideal field” (1964/1968, p. 171).  These fields of experience are seemingly intangible because they are not objects, they are “that through which objects are possible” (p. 171). In the context of performance, these fields are that through which performative events are possible.

Deleuze and Guattari also provide insight in this context because of their commitment to the notion of the multiple, non-hierarchical, and transversal energies that continually assemble and disassemble in connection with one another. Their work is a radical rethinking of experience that considers living beings as dynamic matter, energies, and flows that are no different from other assemblages of matter, energies or flows (1987/1988, pp. 3 – 7). It is a truly egalitarian conceptualisation where no one assemblage is more important, fundamental, or essential than any other. It affirms that things only seem fixed because of the durational and artificial isolation of systems, entities, or states.

When the performer attunes-to the durational forces of difference in the domain of becoming they can recognise through their lived experience how there are degrees of intensity. Life and play (as both verb and noun) can dissolve the boundaries between everyday living and artistic performance. However, the performer is not naive in this conceptualisation. As Professor of Performance Studies, Diana Taylor (2003) notes, performances function “as vital acts of transfer, transmitting social knowledge, memory, and a sense of identity through reiterated, or what Richard Schechner has called “twice-behaved behaviour” (p. 2). Taylor recognises that performance operates on different levels and that performances such as dance, theatre, ritual, or political rallies can be bracketed off because these events begin and end at specified moments in time (2003, p. 3). The performer knows that the performance is a heightened version of everyday living but, because the performance is bracketed off, it operates at a greater intensity. The performer knows that the performance is still immersed within the continuing life of a human entity which itself is also bracketed off by the moments of birth and death.

Influential theatre practitioners such as Peter Brook, Jerzy Grotowski, and Eugenio Barba worked within this kind of bracketed performance by challenging “the notion of audience as distanced observer and the monopoly of text-based theatre” (Reeve 2011, p. 10). These performance practitioners developed actor-training methods that focused on unblocking the physical body and voice rather than on the accumulation of formal acting skills for the purposes of presentation and representation. Grotowski’s laboratory, in particular, where small groups of actors, experiment with the physical aspects of theatre and its relationship to role, audience, spirituality, and ritual is highly influential in contemporary physical theatre. For example, in an unpublished interview with Mary Luckhurst in 1987 DV8’s Lloyd Newson acknowledges that his use of the term ‘physical theatre’ invokes a short hand for a range of practices associated with Grotowski’s laboratory (DV8 Physical Theatre 2016).

This theatrical lineage, focused on unblocking the physical body and voice, has been formative in shaping my research related to fundamental structures. My performance practice has never been about developing formal acting skills to represent characters. My pursuit of body-centred practices such as the Alexander Technique, Body Mind Centring® (BMC), and Focusing highlights a desire to work with and harness the fundamental structures of life.

This theatrical lineage, focused on unblocking the physical body and voice, has been formative in shaping my research related to fundamental structures. My performance practice has never been about developing formal acting skills to represent characters. My pursuit of body-centred practices such as the Alexander Technique, Body Mind Centring® (BMC), and Focusing highlights a desire to work with and harness the fundamental structures of lived experience.

In the following section, I describe the ways in which I test and validate, through first-person experience, the conceptual ideas associated with difference, the real and becoming from a performance practice perspective. I share the ways I actively engage with imaginative processes to reconceptualise and enact “the real as forces, energies, and events” (Grosz 2011, p. 85).