5.4 The Möbius Loop in Performance 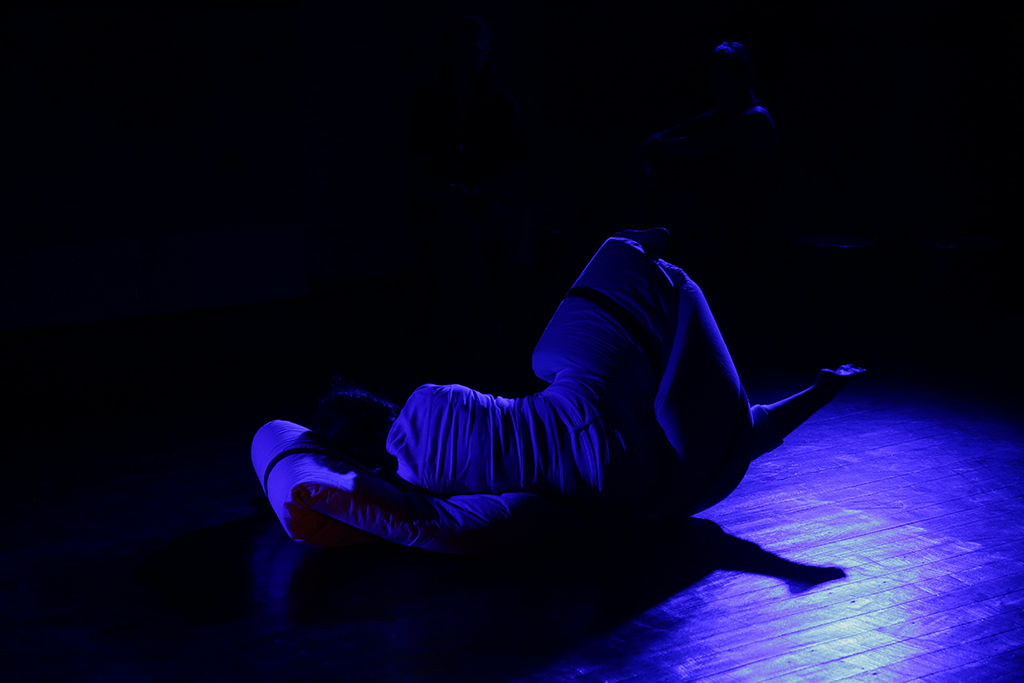 My performance work with the Möbius loop required a body-centred, physical encounter that was not about dance technique but was about movements from life. I wanted the performance to be an encounter with a thing that was both found and made. The work of choreographer and theatre maker Pina Bausch was of influence in this regard. As Bausch says,

To understand what I am saying, you have to believe that dance is something other than technique. We forget where the movements come from. They are born from life. When you create a new work, the point of departure must be contemporary life – not existing forms of dance. (Bausch 1989, p. 91)

According to Climenhaga, Bausch “reduces the ballet down to its most essential image, and concentrates on the depth and power of that motivating image” (2009, p. 11). Similar to Bausch, and after Antonin Artaud, I approached my performance as a process of creating “a world of the stage rather than a world on the stage” and a process of shifting the performer from one that is “absorbed in character to one as elemental and actual” (Climenhaga 2009, p. 34).

The development of my performance was also influenced by the work of Brendan O’Connor and Tony Yap. Their 2015 performance, Dionysus Molecule, was an “enactive, immersive, ritual work” (Rothfield 2015, p. 23) that also took place in the Oratory at the Abbotsford Convent. Yap and O’Connor created a performance that was, as Rothfield says, intended to be “striking or powerful, rather than representational or conceptual” (p. 23). What I take from their highly visceral work is a commitment to being open to the forces and intensities of the intertwining body-world chiasm. I noted in their performance a desire to augment everyday experience through a mix of Yap’s Malay Shamanism and Butoh, as well as a more contemporary performance practice. The performance of Yap and O’Connor becomes, as dance does for Bausch, “a confrontation with behaviour and bodily presentation, it is an organization of action that addresses life itself rather than an imitation created from the comfortable distance of an intermediary technique” (Climenhaga 2009, p. 50). Using this approach, I attempted to encounter the Möbius loop in performance and therefore embody rather than represent ideas about the intertwining- the chiasm. I describe those performance attempts in the following discussion of excerpts from my performance event in April 2016.

In the opening sequence, I am pre-set in the space, wrapped and folded into the Möbius loop. Only my legs are visible from the far end of the space. As they entered the performance space, the audience encountered an unidentifiable, seemingly non-human object in the centre of the space and heard the soundtrack Earth Seen from Above by Meredith Monk. This soundtrack is a contemporary choral piece, chosen for its mix of tuneful and discordant vocalisations. The musical intervals are similar to a Gregorian chant. The tonal quality of this work references the religious history of the Abbotsford Convent and was intended to evoke a sense of ritual.

Opening the performance in this way allowed time to connect with the space before the audience entered, and to use breath to calm the nervous system and attune-to experience differently. I directed attention to points of contact I could sense; contact between my legs, back, head, Möbius loop, floor, and the density of internal organs. This vignette fostered an environment where I could drop-in to the sensation of whole-body breathing. My folded shape was somewhat lung-like and so I use this idea as a sensory metaphor to activate a process of what Bainbridge Cohen calls cellular breathing. She claims that:

We enter the state of cellular breathing by bringing attention to our breathing. We initially feel our external breathing between our lungs and the air around us. Gradually, we release into internal breathing through fluid exchange in all the cells of our body. We then feel our whole body expanding and condensing as one cell. With practice, we experience increased density and vitality in our breathing as our regular breathing becomes more concentrated and we open to increasingly subtle breathing of all our cells. (Bainbridge Cohen 2012, p. 162)

My hope was that this attentiveness to my own body breathing, and the visceral shifts that the sensory metaphor of imagining myself as a large lung brought to my experience, would trigger attentiveness in the audience. This powerful metaphor, supported by the quietude and minimal activity within the space as the audience entered, supported an experiential shift for me that led to an experience of whole-body breathing. I became more aware of the body-world chiasm in these moments, and I could sense a quiet attentiveness as the audience entered.

For some audience members, the abstract and unfamiliar opening did act as a catalyst for them to slow down and become more attentive. For example, one person could “luxuriate in a very gradual unfolding, emerging, taking all the time in the world to form” (audience reflections 17 April, 2016). Another suggested an attentive state was triggered as they wondered “was it an embryo….then a bird? Raised lots of questions for me”. One person thought the opening piece was symbolic of the metamorphosis in life … as we transition from one state to another” (audience reflections 16 April, 2016). Another became attentive by letting go of meaning making altogether, “ I was uncertain of what was going on. Then, I just stopped wondering and everything flowed” (Audience reflection 17 April 2016). For others, the quietude was difficult because it went “on for too long”.

The audience reflections are not presented here as empirical evidence that my research intentions were realised but are used to validate my own experience. They signal a possible inter-subjective congruence that validates my own attentive state and the attentiveness I sensed from the audience during this opening sequence. In the next vignette, I changed the pace and more actively worked with the Möbius loop which dramatically changed the mood.

This sequence directly followed the opening vignette. At the conclusion of the Meredith Monk track in Vignette 1, I allowed my head to emerge from the Möbius loop and to actually see it rather than just feel and be in it. There was a moment of stillness where I allowed a sense of loss to be present as the music finished, followed by a moment of decision to continue without the music. The movement in this vignette was in stark contrast to the stillness of the previous vignette. The score I used during rehearsal was the following series of words:

These words also helped to trigger a felt sense of how the downward forces of gravity and the upward forces of life co-exist and work upon the body. I spent time experimenting with the heavy downward pull of gravity – endowing the Möbius loop with this quality and playing with this against my body. I then worked with the lighter, soft upward pull of life – endowing the Möbius loop with this quality and allowing this to affect my body. During the performance event in April 2016, I no longer used the words as a trigger and I simply allowed myself to sense through the sequence (Moving Image 6). By the third night, I was able to include more and more in my awareness. The texture of the floor, the ever-changing shape, angles, weight and pull of the Möbius loop. I had moments of actively dilating my attention to include the people in the room, the whole room itself, and the entire site of the convent.

The Möbius loop model was a significant devise for understanding, experiencing, and communicating Merleau-Ponty’s concept of the intertwining – the chiasm. Even the structure of my performance in April 2016 utilised the Möbius loop model. For example, vignettes folded into one another and moved smoothly between sound, speech and song. Ideas vacillated between the abstract and the concrete, and communication shifted between gibberish, coherent text, and song.

The visceral processes I used to build my attunement capacity helped me to sense into what Merleau-Ponty calls the “thickness” of the “perceived object and the perceiving subject” (1945/2012, p. 53). Accessing experience differently, therefore, fostered a deeper understanding of the body-world chiasm, and helped me to apprehend our “living communication with the world that makes it present to us as the familiar place of our life” (p. 53).

The Möbius loop model operated on two levels in my performance. First, it operated as a three-dimensional symbolic representation of the body-world chiasm. Second, it operated as a performative thing that I could encounter in performance. The physical presence of the Möbius loop was central to the first five vignettes and then, as an object in space, it was hoisted to the ceiling and its presence remained metaphorically available for the rest of the performance. For some, its physical position in the space fostered reflection during the performance. As one audience member says:

Once the Möbius loop was hung up above us all, having settled there … well, it never really settled. It swayed, due, I think, to the rising heat in the room from the heater and body heat. This added to my sense of aliveness in the room – in us all indeed. I kept reflecting from it moving, to the audience member, to you, and so forth…

Using the mode of performance to heighten experience through my interactions with the Möbius loop created the conditions whereby live forces and energies could be felt and experienced by me as a performer. The close proximity of the audience, as I propelled myself with Möbius loop, had an element of risk and unpredictability that required focused attentiveness to the surroundings, to the floor, to my breath and to others in the space. The form and shape of the Möbius loop, when in motion with my body, and when I was attuned-to the forces and energies between, developed, for me, a visceral apprehension of non-binary, unpredictable, and creative forces that are fundamental to being immersed in a world.

Based on my research, I claim that focusing attention between things, embodying sensory metaphors, and encountering the Möbius loop in performance makes it possible to attune more readily to the fundamental intertwining structure of life. It is therefore, a key contention of this thesis, that the fundamental intertwining structure of life works upon lived experience as a generative dynamic. It follows then, that life is deeply implicated in the processes of artistic creativity. In the next chapter, I discuss other ways I have accessed experience differently using the concept of ‘becoming’ as discussed by Grosz in a lineage that includes Darwin, Bergson, and Deleuze.