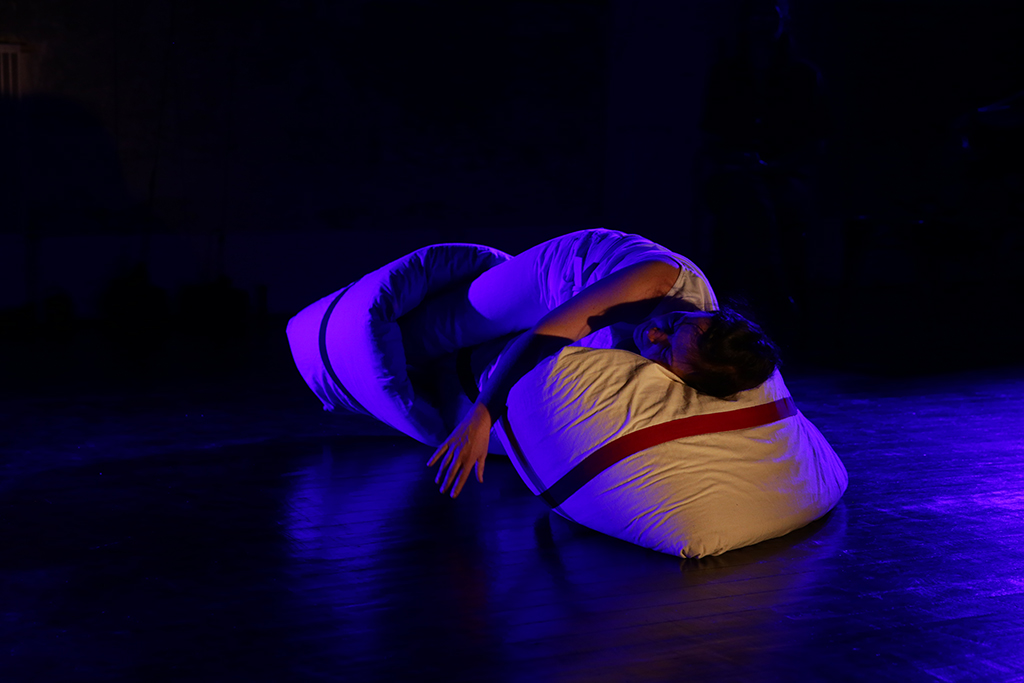 In the previous chapter, the focus was on wild Being. I discussed the ways I engaged with this concept to eschew mind/body, conscious/unconscious binaries and access experience differently in the process of making artistic performance works. In this chapter, I focus on “the intertwining – the chiasm” as presented in Merleau-Ponty’s posthumously published work (1964/1968, p. 130). I discuss the ways I applied this concept in my practice to eschew subject/object binaries for the same purposes. I am guided by the question: How might the concept of the intertwining – the chiasm serve two aims: first, support conscious ways of accessing experience differently, and second, operate in service of artistic creativity?

In Section 5.1 of this chapter, I examine how Merleau-Ponty’s phenomenological description of hands touching one another forms the basis of his absolute intertwining body-world system that accounts for embodiment, inter-subjectivity, and the world. I describe my own experiences with this phenomenological exercise and discuss the insights and experiential understandings that I have gained by engaging with this exercise over time.

In Section 5.3 of this chapter, I explain how I use Grosz’s suggestion of the Möbius loop model to not only rethink the relations between the mind/body binary, but to also rethink subject/object, body/world binaries, and in doing so activate my own experiences of the body-world intertwining chiasm. I theorise the Möbius loop model as a useful thing and as a metaphor for fundamental conditions. Like Grosz, I consider “the thing” as that which is not conceived as the other but is conceived as the “resource” for “being and enduring” (2005, p. 131). My experience leads me to argue that attuning-to the body-world intertwining chiasm can help to develop deeper understandings of how the fundamental forces of invention work in service of human artistic creativity.

In Section 5.4 of this chapter, I describe the knowledge gained from working with a body-sized Möbius loop in discovery workshops with body-centred practitioners. I encounter the Möbius loop as a thing and, like Grosz, I follow Darwin in thinking that “the thing is the real which we both find and make” (2005, p. 132). I describe the process of building a relationship with the thing and noticing what happens when the thing is endowed with the qualities of a conceptual idea such as ‘creativity’. I also discuss the difference between representing something and embodying something, and how these things require different qualities of attention.

In Section 5.5 of this chapter, I use excerpts from my performance practice to demonstrate how the intertwining – the chiasm manifests through my performance practice. I discuss the visceral processes I devised to sense into what Merleau-Ponty calls the “thickness” of the “perceived object and the perceiving subject” (1945/2012, p. 53). I contend that by focusing attention between things, embodying sensory metaphors, and encountering the Möbius loop in performance it is possible to more readily attune-to the fundamental body-world structure of life. I close this chapter by claiming that this fundamental body-world structure of life is a dynamic and generative force that acts upon all things, and is therefore deeply implicated in the processes of human artistic creativity.